We have finally updated our appearances page. It is currently up-to-date with our past events and upcoming events. We'll be super busy this weekend with three events planned out, so be sure to check the appearances page for our locations and come check us out!

We tend to make appearances mostly as the Rocket City Ghostbusters due to the scientific nature of our city (Huntsville, AL) and the child-friendly nature of the Ghostbusters. However, our other projects warrant different types of appearances, and some appearances aren't based on certain projects (such as conventions). If you would like for us to appear in costume at your next event, please send us an email at 2storyprops@gmail.com.
Posted by David Reimer at 10:17 AM 0 comments

Well now! I didn't get much further on the Tainted Love proton pack before I chose to restart it entirely. Originally, I was basing it off a sketch I made of the pack after reading the comic. There were several details that I overlooked when making that sketch, and my lack of accuracy checking coupled with me thinking of how it should look made the build just wrong in all aspects.

I also ended up briefly chatting with the comic book's artist over Facebook, Salgood Sam, who referred me to his production sketches of the proton pack. The sketches provided details not seen in the comic, and were far more detailed in general. So I decided to start over completely, using only his production sketches to build the pack this time. I also felt like I was spiraling away from my roots as a prop builder with the previous build, so I got back to doing what I use to do in the beginning - sculpting out of MDF. 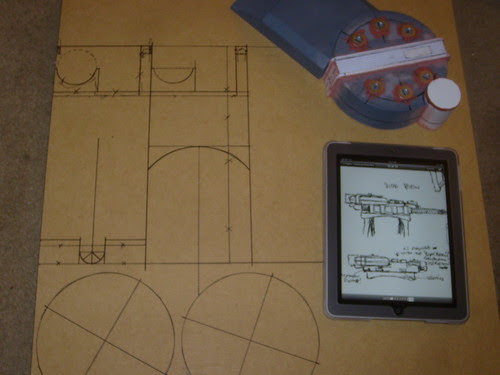 So far the builder has been extremely simple. Getting back to the basics is an important lesson to any artist, and especially so in this case. Using very simple materials, I have been able to build most of the pack in only a weekend while maintaining attention to detail and accuracy to Salgood Sam's original production sketches. No overthinking, no overdoing, just straightforward prop building.


Construction so far has been with MDF, sintra, PVC, and a few washers. Right now I'm building this is two main sections: the cyclotron and the motherboard. My original plans were to mold it as two separate components, but I'm currently thinking that I can get them to be one single piece for a single mold. I have to reshape the top portion of the motherboard (the part that sits under the cyclotron), and in doing so I can probably make this into one single piece. If I can do it, it will make for a more simple molding process.

Here is where the proton pack is right now. I've added the little arms that hold on the ion arm. I was going to have the ion arm be a separate PVC piece that I add to the castings, but since I have a little recessed pocket for it to sit in, I might as well add it to the master copy to be molded in as well. The 1/2" PVC pipe brings the total length to 14.5" or so, which is a tad over my initial 14" estimate (Salgood Sam also estimates it to be 14"), but overall I don't think it will detract from the prop too much. I am considering chopping the motherboard in a certain spot to make it a bit shorter, but I haven't decided if it'd be worth it yet. 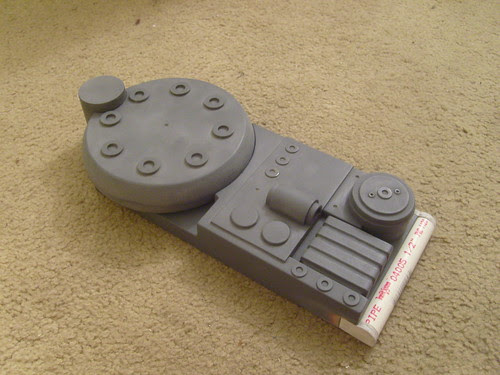 I'm currently in the hustle to move, so I don't expect to make much more progress on this for a few weeks. I may try to chop the motherboard and shorten it and try to reshape the top of the motherboard before I have to clean out my current work area, but I probably won't get much more than that done before the weekend.
Posted by David Reimer at 8:51 AM 0 comments