There isn’t much to report as far as Thomas’ helmet goes since it’s already mostly sculpted, except for two minor things. The first thing is that I’m having the entire ear lathed by a friend in Tennessee. The entire ear is simply a profile revolved around an axis, so it can be lathed. I’d rather hand that detail off to an experienced lather than try to sculpt it freehand twice and expect above par results. The second thing is that I’ve recessed the visor area on the face. I wanted to have the visor sculpted into the helmet so that there would be no question as to where to cut for the visor hole. So I cut the visor out and replaced it with some “For Sale” sign plastic and smoothed it out. 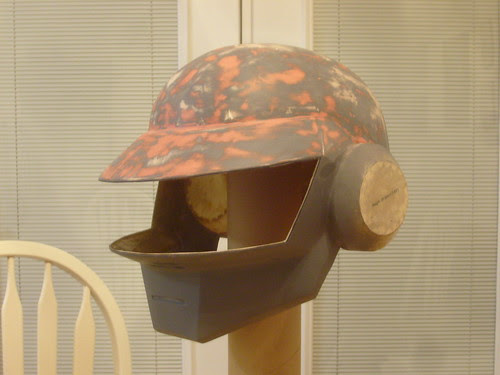 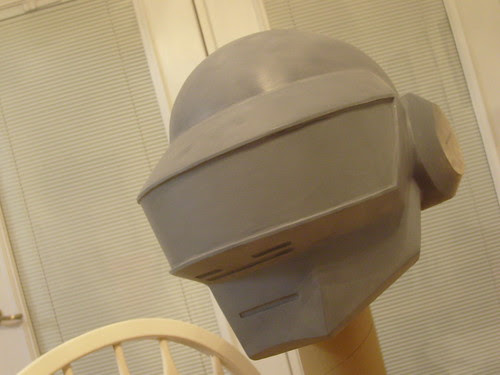 Following in Volpin’s footsteps, I had a local trophy shop (Redstone Recognitions) laser engrave the details on Guy’s ear plates. It really is the best option for this if you want exact mirror images of the details. Not being able to find adequate visual references for that particular part of the helmet, I used Volpin’s ear plates as reference. I drew out the design in Adobe Illustrator and sent in the vector file. For $10 I had him laser engrave two copies of the file on a piece of MDF. The engraving is shallow, but super crisp – and more than enough depth for molding. However, some scaling issues arose between the file transfer. I was using Adobe Illustrator, and he was using Corel Draw. The file should have engraved at exact scale, but it ended up being about ¼” shorter, about 10% smaller overall. For $10, I could have him do another, larger copy of the file to compensate for the scaling issues, but I may be able to work with what I have. I won’t be able to tell until I cut out the existing detail-less ear panel and mock up the engraved pieces in place. 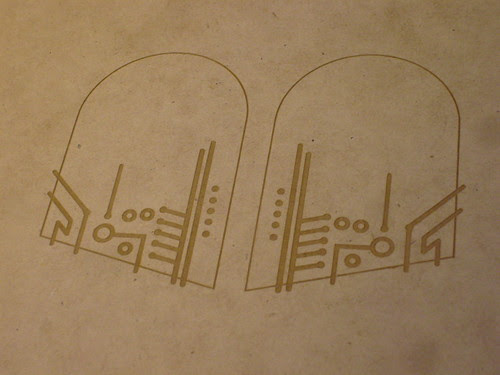 I started sculpting Guy Manuel’s helmet this weekend. Beginning early Saturday morning, I started layering on thin layers of Bondo. I haven’t ever really used the bondo spatulas before, so I figured I’d give it a try. For simple shapes like this, it works wonders. For trickier areas I still prefer applying bondo with my finger. But with the spatula, I was able to apply an even coat over all the surfaces, and I haven’t really found any major shape issues that need to be addressed. Because I had about 4 layers of bondo on the visor, I was able to spend about an hour shaping it with my palm sander, and it was pretty much ready for smoothing.

The rest went super quickly. By the end of Sunday, I had all the surfaces with bondo on them, and I’ve even begun smoothing them out with glazing putty. As of right now, the frame has one good pass with glazing putty on it, and it only needs minor touchups. During the week I hope to start smoothing out the visor and back recessed areas, as well as starting to apply the seam line detail above the ears. Guy’s Tron helmet also has a cap over the normally exposed wired area, so I have to sculpt that detail in as well. 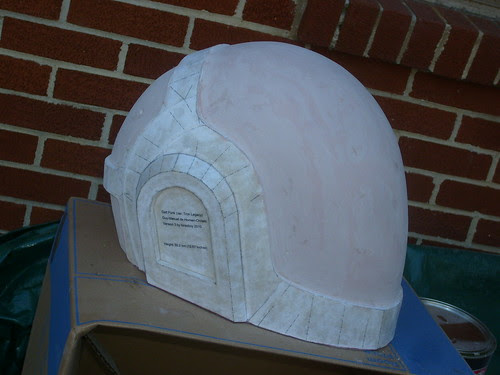 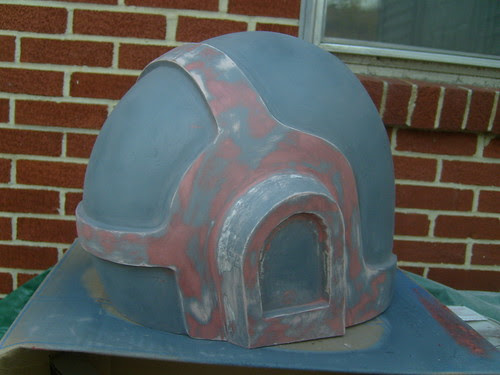 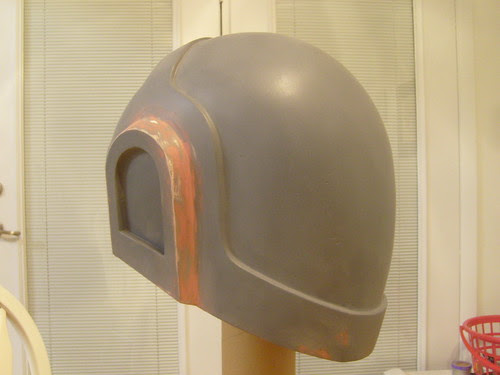 In other Daft Punk project news, I recently picked up some fabric for the jackets and pants. I know I didn’t pick up enough to make both jackets and both pairs of pants, but I have enough for one full outfit and either another jacket or another pair of pants. Judging by the hi-res version of the Tron image in the previous post, I’ve determined that the best available material I can get locally is white fleece-backed vinyl. The fleece-backed stuff has more give to it than the marine-quality stuff (which is usually used for upholstery), and it folds just like the material in the photo. The material in the photo doesn’t appear to be very stiff leather at all, so I figure what I got is one of the best analogs I could find.

One problem I’ll have to face is the perforation in certain sections of the material. Certain panels on the jackets and pants have a fine grid of holes throughout. Those holes appear to be spaced by about a ¼”, so that means a LOT holes. I have two ideas of how to go about achieving the look. I intend to cut a 6” by 6” swatch of material and apply the grid of dots to it with a fine point sharpie. If the dots look like holes at close-enough of a distance, then I’ll have a feasible option. Another swatch will be cut and then I’ll probably apply the same grid with something that can punch the holes at that size. I haven’t figured this one out yet (as I don’t work with fabric often), so any ideas you can pitch will be considered. A third option that I might consider (and it would require outsourcing to someone with the equipment) would be to have the pattern screen printed onto the vinyl. It would have to pass the same test as the sharpie method, but it would go a LOT faster. I have several people in mind for this, so it definitely is a feasible option at this point.

No photos to show of the fabric part yet, as it's just a big lump of white vinyl right now. However, here are more photos of the helmets for your viewing pleasure: 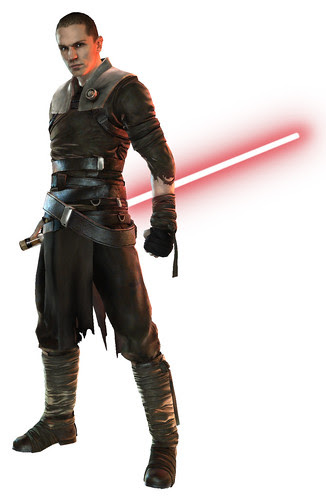 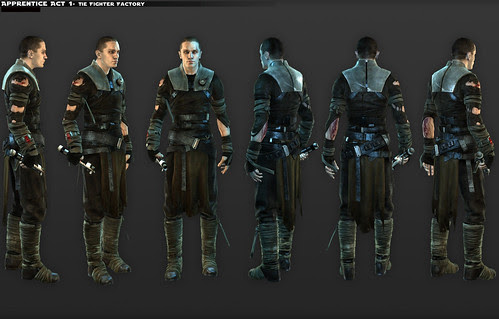 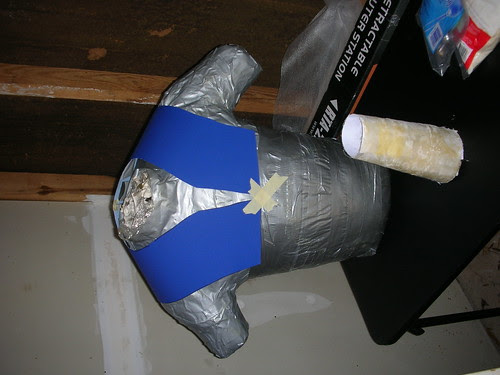 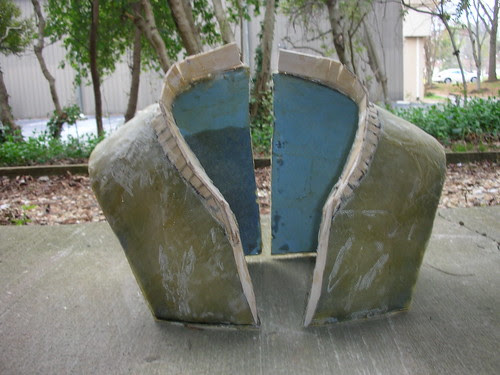 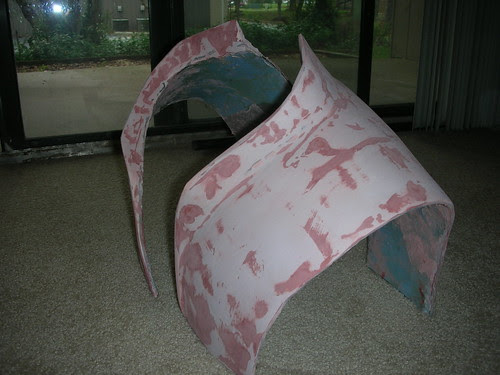 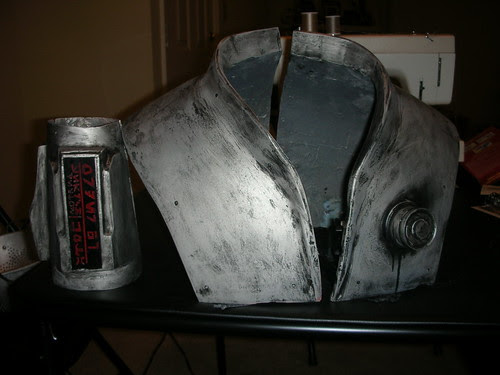 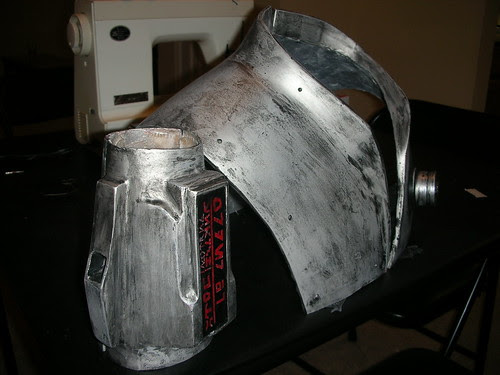 This technique worked very well and I am really happy with how the armor looks. The problem I found however was that the armor does not allow enough room for the connection straps or the tunic itself, which is due to an issue with the mannequin. If I attempt this again I will be using a freshly made mannequin as well as add padding to ensure the armor has room to breathe. Additionally, the armor will be hallow cast so it will be much lighter and allow some flexibility.
Posted by Wayne at 6:16 PM 0 comments 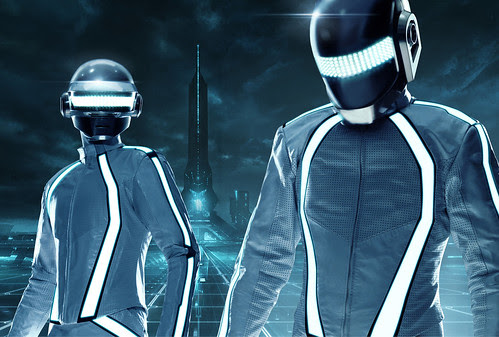 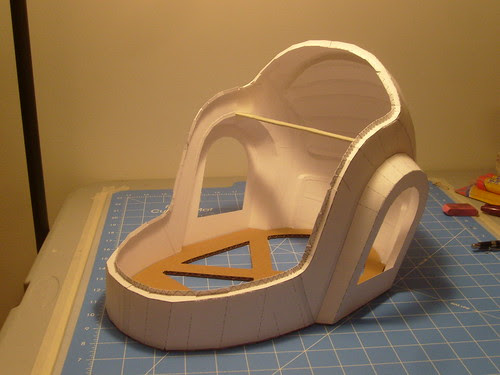 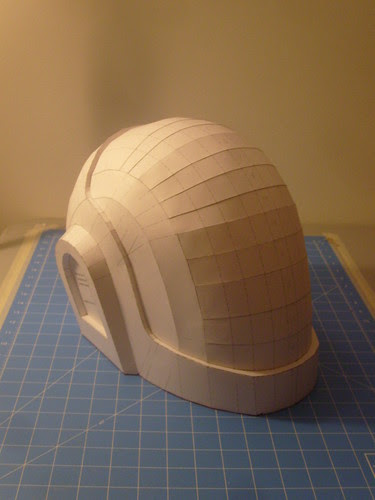 Click here to see the rest of the photos!
Posted by David Reimer at 9:56 AM 9 comments