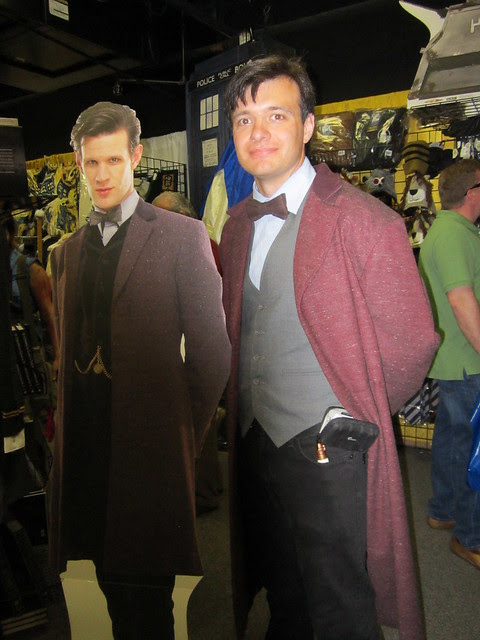 Earlier this year, our friend Dan, better known to the Dragon*Con crowd as steam punk professor X, asked if Dalek Braun could be the flower girl in his wedding. Obviously I said yes, but I needed to figure out what to wear myself to the wedding. When I started building Braun, I originally intended to dress up as the 9th doctor as he’s my favorite, but I found the coat didn’t look right when I am holding a controller. Additionally I didn’t really want to do 10 or 11 because so many people have done them before and I like to be unique. After some research I found the 11th doctor was going to wear a new outfit with a purple frock coat in the second half of season 7. Since the frock coat fit well with the Victorian theme of the wedding I decided to go with that outfit. 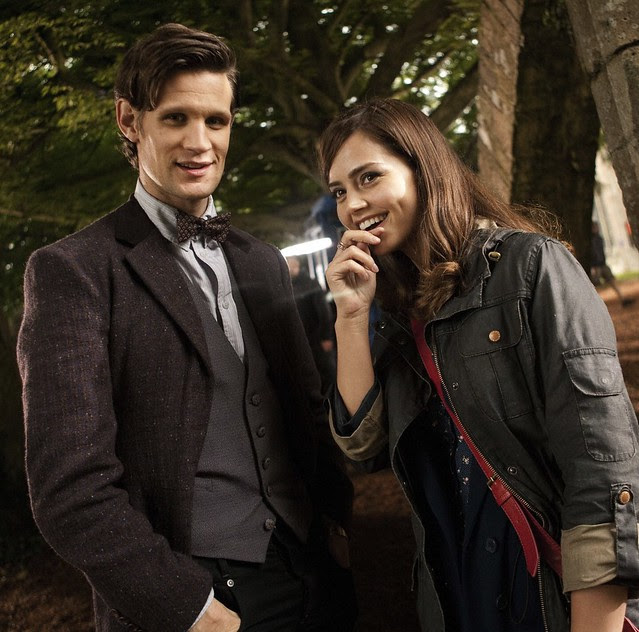 Now I’m going to put a disclaimer here that I originally had no intention to make a write up about this costume as it’s not a prop and simply made from a pattern and found materials. Therefore, pictures are very limited. However, after wearing it to several cons, I’ve received a lot of questions from people about the fabric, shoes, and pattern, so I am putting this out to help anyone looking to make this particular doctor outfit.

First, the jacket. I started off by going to the local Jo Ann and flipping through their pattern catalogs. Eventually I found Simplicity pattern 2895, which has patterns for the frock coat and other western costume pieces. The coat is made per pattern, the only modification I made was leaving the buttons off. 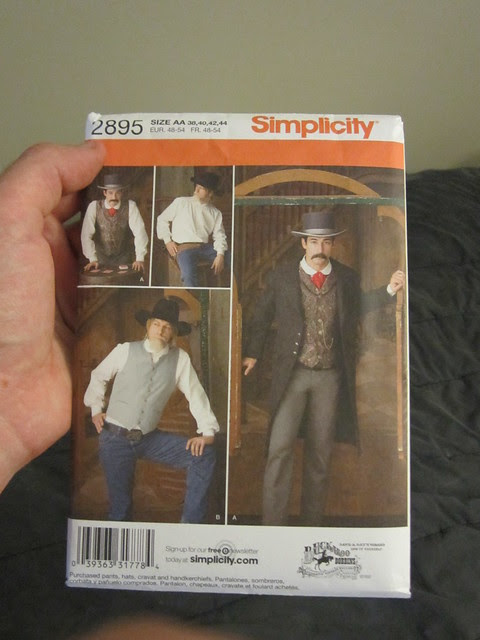 Finding the fabric was a little harder. From the images I had at the time the coat appears to be made of a plum wool fabric with a distinctive weave. The fabric I went with was listed as “Wool Suiting Burgundy/Grey, UP-460” from fabric.com. Unfortunately, they no longer appear to carry it. The liner is purple suit liner and the collar is purple velvet, both from Jo-Ann. 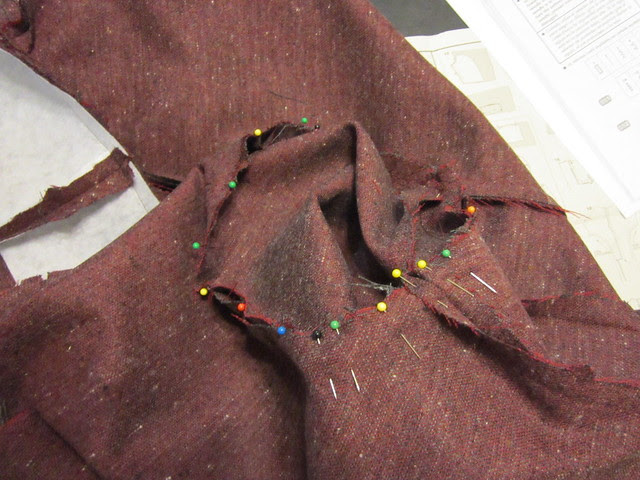 Close up of the fabric while attaching the sleeve 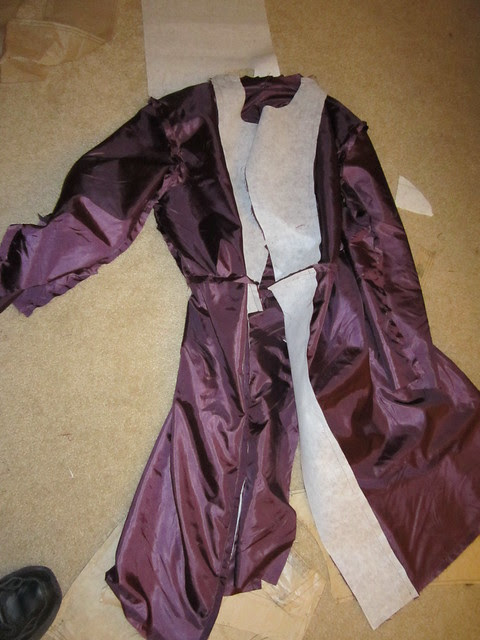 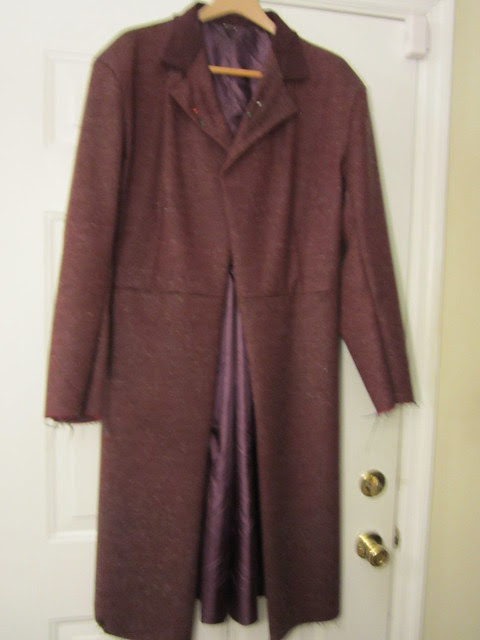 At one point I attempted to make my own grey vest for the costume. For this I used Simplicity pattern 7030 and fabric from Jo Ann. The result was okay but I did not like how the back came out and didn’t know how to tailor it. Instead, I wear a 517 Grey wool men’s vest from here. 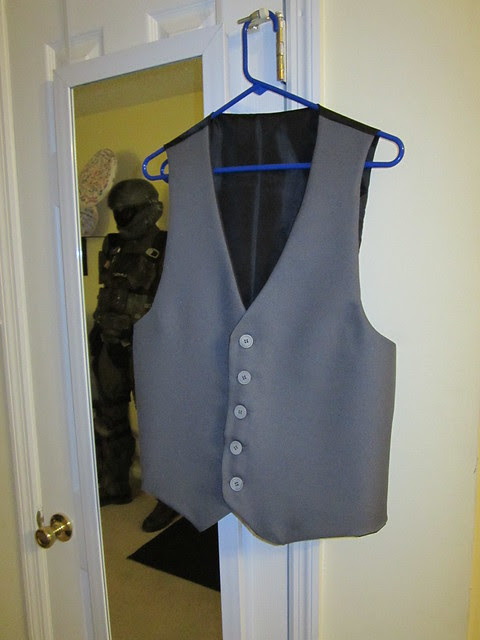 Original vest I made

I could not find a brown bow tie I liked, so I ended up making my own. Using brown fabric I made a clip on bow tie using the pattern that came with the vest 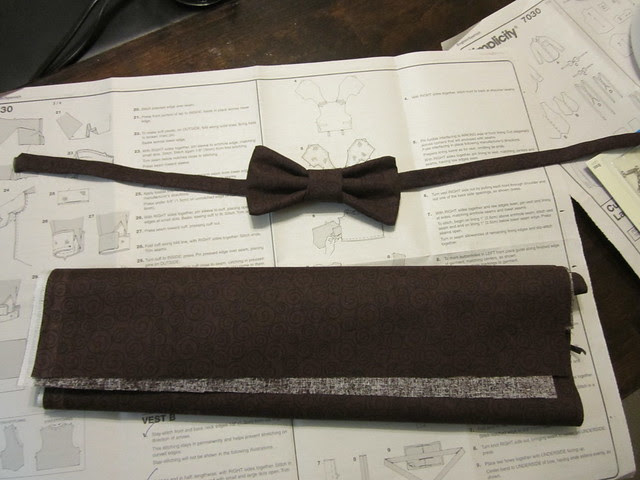 Shirt and pants were found items from Sears. The shirt is a Covington Fitted blue stripped dress shirt and the pants are Levis 514 jeans. 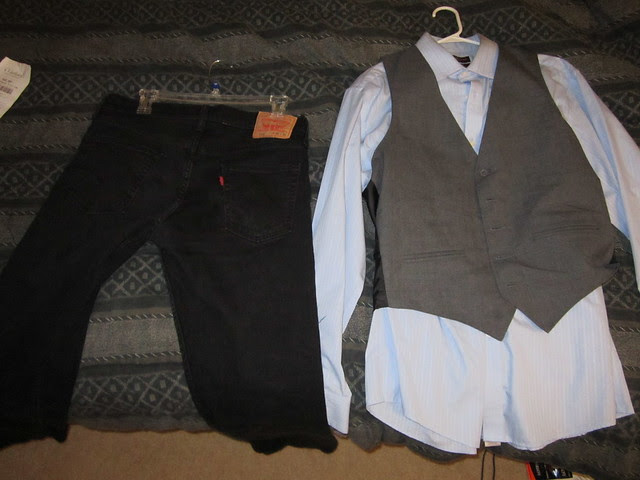 Finally, my boots were purchased from Amazon here . They are listed as Men’s Black Polar Fox boots. At the time I purchased them I had no good references of the Doctor’s feet. Today I am fairly certain they are suppose to be brown 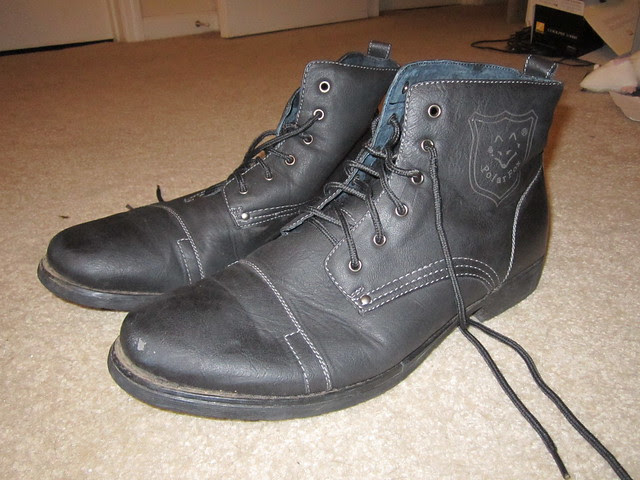 I really enjoy this costume. I think it goes well with the Dalek and is a nice costume to wear for walking around or going to the dealer’s room where our usual bulky costumes won’t fit. Occasionally for Doctor Who themed parties I will throw on my grey mau5 head with this costume. I’ve received several compliments on how the head matches the costume (I guess the grays go together?) but the head was made for David’s bachelor party and I usually wear it because it is the most accurate and comfortable mau5 head I have made. There will be a How2 for fabric heads sometime in the near future which includes the changes since our first fabric mau5. 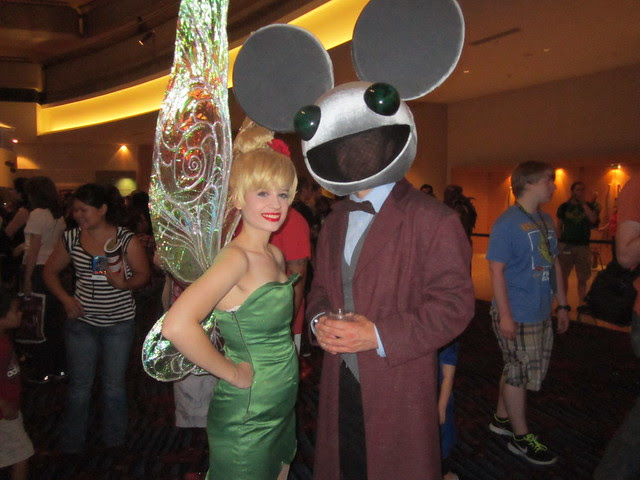 Now that we have this write up out of the way, time to start the long blog entry for Jim Lovell’s moon suit! 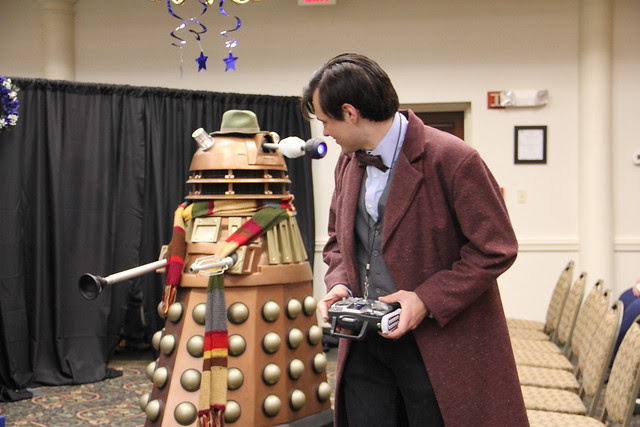 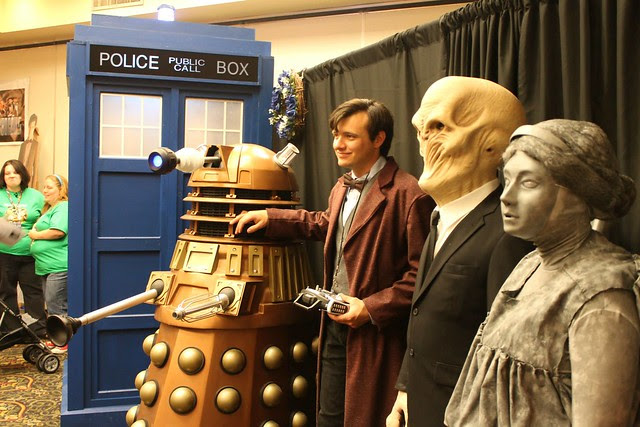 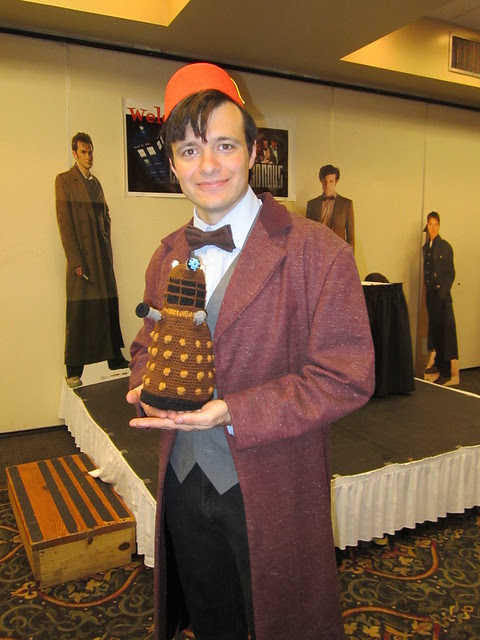 Traditionally, Dragon*Con has always involved myself (Wayne), David, and his girlfriend Jecca going down to Atlanta for the con. However, this year had some higher priorities as David and Jecca tied the knot back in June and recently purchased their first home. With all this going on, they decided to take this year off; hence this year’s write up will only be from my point of view. Don’t worry though, we all have purchased our badges for 2014 and will be back in full force next year!

This year seemed to go well with the new project we unveiled this year, Apollo 13 Commander Jim Lovell, as this year’s con involved many technical difficulties and triumphs. Things started off this year with the debut of our Jim Lovell Moon suit on Thursday night. (Write up will be up some time in the next week). It was a BIG hit, and we proved that I can wear the suit for several hours at a time (more on comfort in the write up). One very funny story from the night I have to share happened when a woman stopped me and mentioned her friend saw me walk by and would like to know if I could walk back to let him get a picture as he was in a wheel chair. It turns out her friend was Sylvester McCoy! That’s right; the 7th doctor stopped me to get a picture. After 3 hours of pictures, I called it a night and got ready for a full day of Doctor Who on Friday. 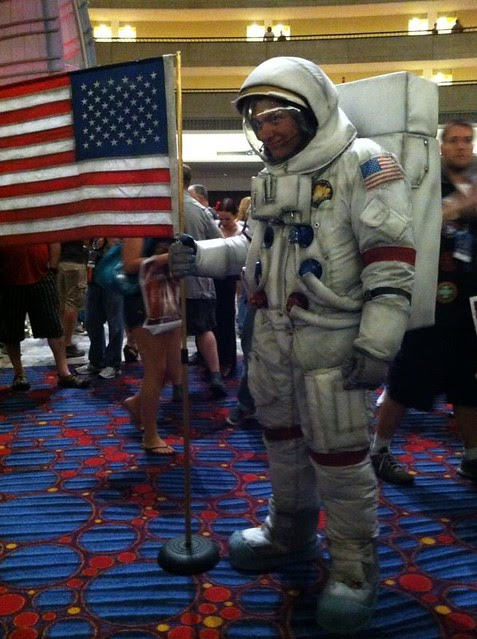 Since my moon suit is based on the Apollo 13 mission, I had this pestering fear that I was going to get it to the convention and for some reason not be able to bring it in. Luckily that didn’t happen with the moon suit, but it DID happen with the Dalek. I had the Dalek out of the van and half way up the sidewalk when I noticed he was leaning to one side. I discovered that his left tire was shot, and after several hours trying to make repairs including finding an emergency air pump, I threw in the towel and Braun spent the entire convention in the van.

With the dalek down for the count, I hit the con in my 11th doctor outfit. The costume is something I sewed together rather quickly for a wedding, but I was surprised to receive a lot of questions about the fabric and complements on the outfit, so I’ll be putting a write up for it soon. Later in the evening I donned the grey mau5 head I made for Dave’s bachelor party and went to the Whovian Ball. I wore this same combination at another con earlier this year and it seems like Doctor Deadmau5 is starting to become a recognizable costume on its own. The party was a blast and I am looking forward to attending again in 2014. 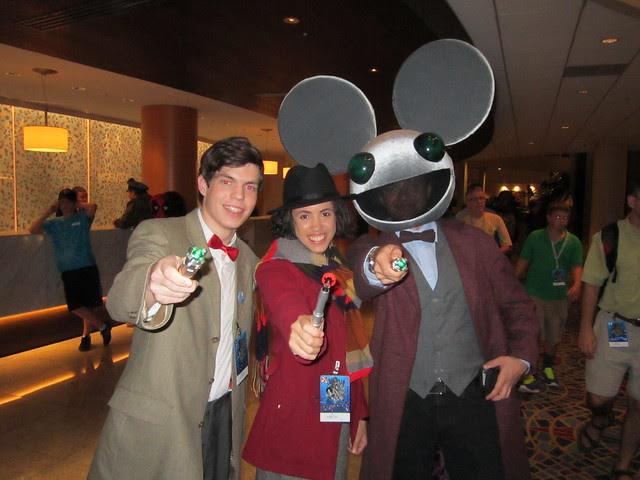 Saturday started off with the parade where I marched with the Ghostbusters and then another round of pictures with the moon suit. Meanwhile, Amanda donned her Marceline costume and took the axe bass we built earlier this year out for a spin. She eventually had it signed by the voice actors for Marceline and Jake! 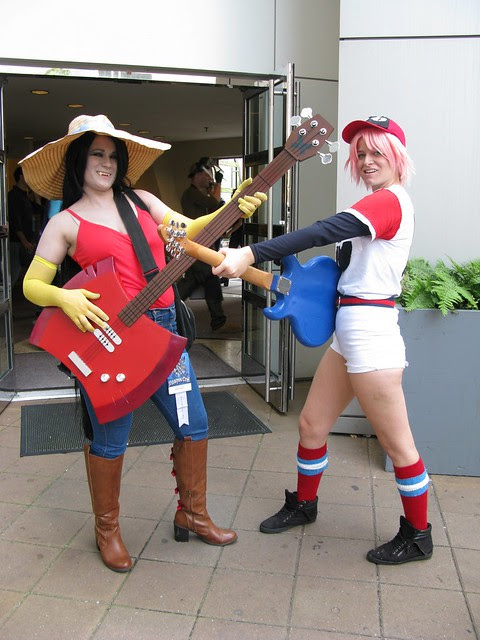 I also want to add that one of my co-workers, David Hewitt, cosplayed for the first time this year! I lent him my Anakin/Vader costume so he could live his fantasy of being a Jedi. Dave is the bassist and singer for a nerd-core band called Foot Pound Force. They performed at the Filk track this year but I was unable to attend. Maybe next year! 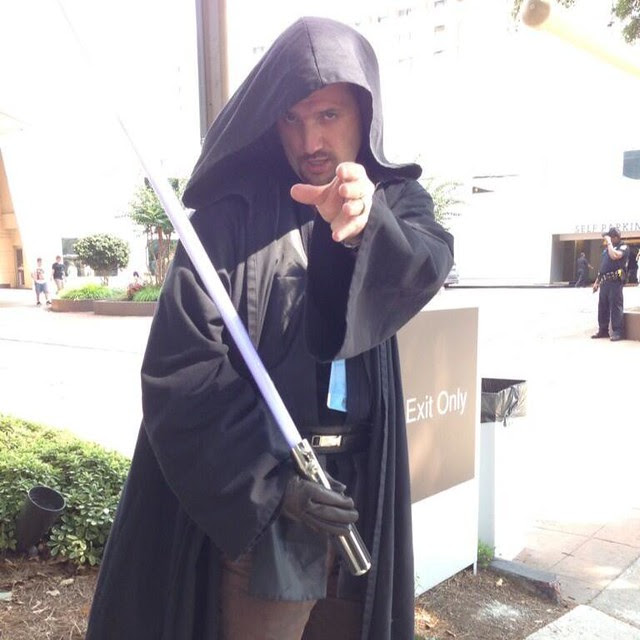 Later in the evening we headed to the aquarium to get some shots of my friend Amanda and her little sister costume. You may recognize the Adam syringe as the one we built for the Sloss Furnace shoot back in 2011. Originally we planned to bring Subject Delta for pictures as well, but we ran out of room in the vehicles and he had to stay behind. 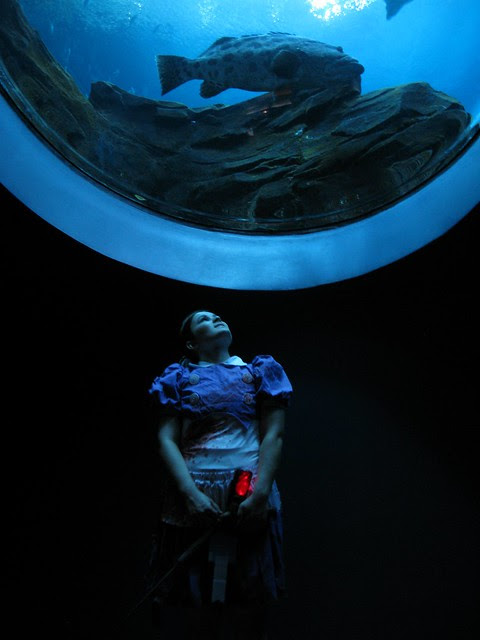 Sunday was game day as I entered the masquerade with my moon suit. I based my skit on the “Dark Side of the Moon” scene in the movie where Jim Lovell imagines walking on the moon. (I cry every time I see it). I was really nervous about the reaction I would get since my skit was dramatic rather than humorous, but luckily the crowd went wild! While I did not win best in show, I took home an award for best historical recreation, and received a lot of compliments. I was really moved when a few people said they teared up during the presentation. I have to give a big thank you to Amanda for being my spotter during the completion, even going as far as dressing up like a mission control engineer. 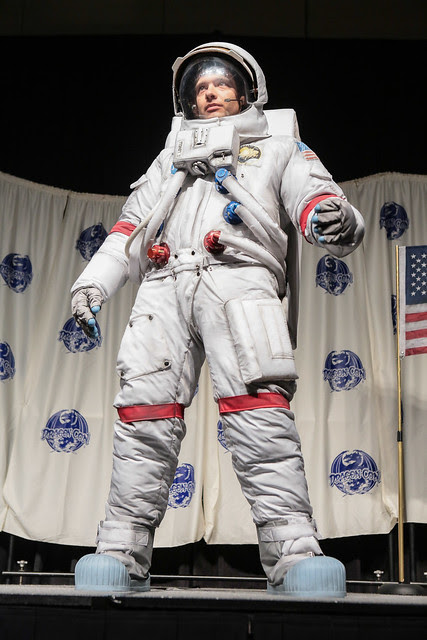 This was my third Dragon*Con contest. I have never been able to find any footage of Subject Delta or the Dalek on stage. However, the entire 2013 masquerade is up on you tube. My skit starts at 0:43:48

And that about wraps up this year. As I mentioned before 2StoryProps will be back in full force next year. Our room is booked, our badges are purchased, and David is already hard at work on three new costumes. I won’t be building another “8 month” costume this year. Instead I’ll be working on a new vacuum former and continuing to upgrade the moon suit in between other cons and smaller projects. Stay tuned for write ups on our 11th doctor, Jim Lovell, the LED mau5 head, and more!

BTW, they are really getting carried away with security now! 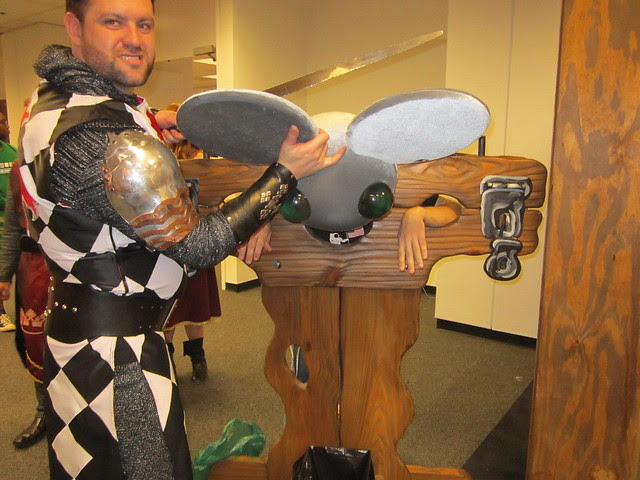