I’ve been making baby steps with the Daft Punk helmets. Really the only significant progress I’ve made is on Thomas’ helmet. I’ve added an initial layer of Bondo to the fiberglassed paper helmet to start the sculpting progress, and I’ve begun smoothing the face portion of the helmet. I’ve also added the mouth and nose details, though I haven’t backed them with anything yet for the eventual molding process. I found that, when the fiberglass was curing, the helmet slightly warped (the only notable effect was on the right side right above the visor portion), so I have to thicken that area with more Bondo to even it back out. Aside from that minor setback, these helmets should go rather quickly. The smooth, simple shapes and the rather low amount of fine details should lend themselves to making these helmets relatively quick projects, though the really time-consuming part will be going nuts getting them smooth enough for the plating process. 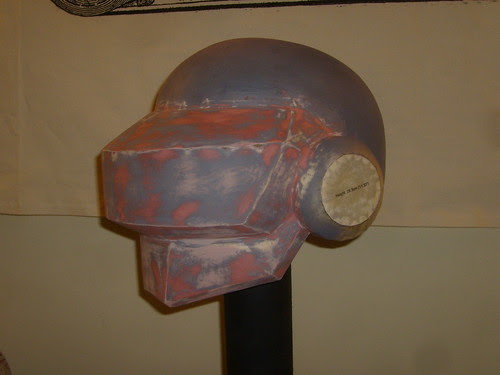 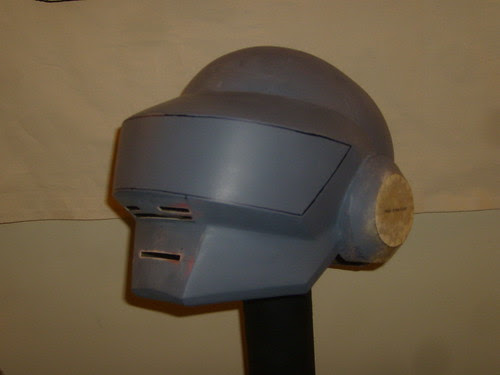 There are two distinct eras for the Daft Punk costumes (though there are several sub-eras in between): Discovery and Human After All (HAA). During the Discovery era, the only reoccurring costume elements were the helmets, gloves, and backpacks. The rest of the costume changed among an assortment of eccentric 70’s outfits. The Discovery helmets sported the LED displays in their visors as well. The HAA costumes swapped out the changing outfits for black leather jackets and pants, and they dropped the backpacks because of a lack of helmet electronics. Although I would like to do the Discovery-era costumes, we’re probably going to be building HAA-era costumes.

The HAA outfits aren’t just any old black leather jackets or pants, so we can’t just be lazy here (as if!). They were custom designed by Dior Homme for the duo and are not available in retail stores. Below is a photo of the duo sporting their HAA jackets. I don’t know the source of the photo, so I can’t say what all those red dots are, of if it’s even them in the suits (it could be the suits on mannequins on some display, hence the reflected red lights, maybe). 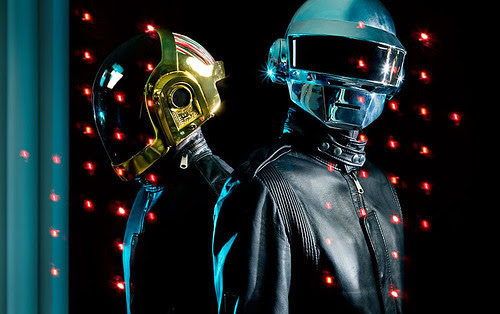 I haven’t scoured the local stores yet (though they aren’t likely to have anything remotely close to what we need), but an initial online search revealed several choices. I was searching for jackets with a correct-ish style collar and with a simple enough design. Price wasn’t a concern at the time, but it happened that this one was the cheapest of my findings ($119).

My main concern for the jackets include having a vertical collar with enough room for an added snap closure and having a very simple, detail-free sign that would allow for easy modification. I’m primarily looking to modify whatever jacket I choose with a correct quad-snap neck closure, a three-snap closure down the front zipper, and shoulder epaulets. I’m also concerned with the correct zipper locations, but that’s something I can add to the jackets later (the jacket doesn’t have to have them at the time I buy). I’m not as concerned about the ribbing along the side, the elbows, and the back because the focus of the costume will obviously be the helmets. However, if I can find enough of the right material to do the zipper closure and epaulets, I might as well add the ribbed sections. The ribbing is an important detail, but I’d rather spend time tackling the easier details that I CAN do rather than not making progress at all because of a detail I can’t do much about.

The trick is finding the right black leather jacket for this project. Thomas and Guy are both pretty slim guys, and their jackets are very form-fitting. The jackets aren’t skin-tight, but they do fit very close to their bodies. A lot of motorcycle jackets that you find are bulky and don’t sit very tight around the body. They are often designed to be bulky so they’ll trap your body heat on colder drives. We’ll definitely have to be extremely discriminating when it comes to jacket fit, of course, so our best potential choice (above) may not even work out if it’s a bulky fit. Of course, if any of you readers know of any good potential jackets, please send us any info you have to 2storyprops@gmail.com.

Well now, I found this, which looks to be as close to an exact replica as you're probably going to find. The ribbing is different, but it's pretty dang close. It's a steep price point, so we're likely not even to consider it. However, given the amount of money we put into our work anyways, we might just end up considering it. Haha! And it seems that a lot of DP fans are getting this one despite the price.