This year marked the third year we have attended the convention. While our costume load was a little bit lighter this year compared to 2010 and 2011, we still had a blast. Here are some of the highlights. For starters, David and I are huge fans of the Avengers and all the connected films. Shortly after the movie came out we found this site which sold shirts with the word “Shawarma” written on the front in the Avengers title font. After we bought the shirts we found that one of the restaurants in the Dragon*Con food court serves shawarma, so we decided to wear the shirts and stop there for dinner on Thursday. (Note: If you are new to Dragon*Con or this blog, D*Con unofficially starts on Thursday in that there are already people cosplaying and having a good time.) Without wearing any other costume materials, we went through the hotels to get to dinner and had people stop us to get pictures of our tee shirts. We did make it to the restaurant and we can both say that Tony Stark does have good taste for grub. 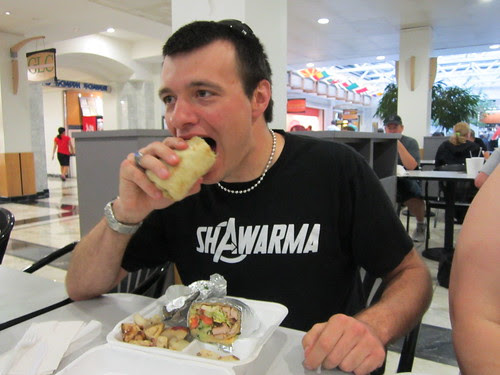 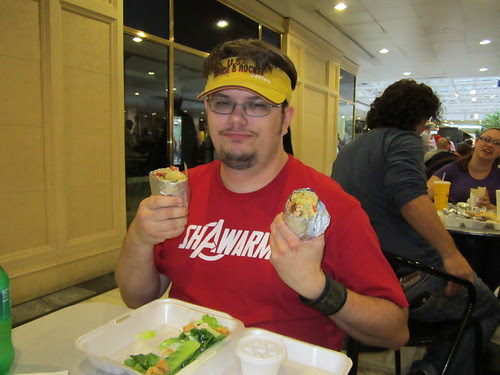 Later in the night we took out our main projects. Dave took his cheese mau5 head (write up coming soon) out for a spin while I took the Dalek (again, write-up coming soon) for its first test run. At this point we were still wearing our Shawarma shirts. Both of us had numerous people come up and say something along the lines of, “I love your shirt” without mentioning anything about the props. It was a baffling experience but we did get some love for the projects and day 0 was a blast. 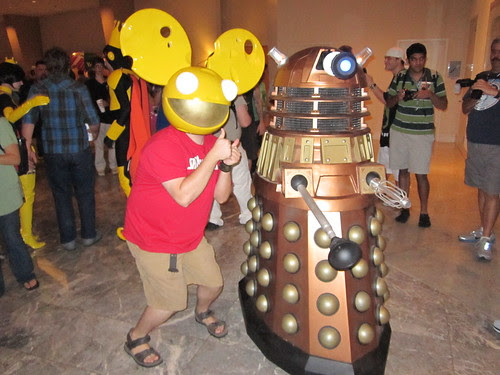 The next two days consisted mostly of checking out vendors and panels and showing off the Dalek. David found some pretty cool Avengers prints by Chris Hamer of urbanpop.com. We have always had a positive response to our projects; the feedback from the Dalek was nothing short of insane. Pictures never stopped and there was always a Doctor Who cosplayer somewhere nearby. One of the many highlights was when our friend Volpin came by, wearing his Thomas gear, and checked out the Dalek. The folks at Beat Down Boogie, who you may know from this video, were on hand and got some great footage which will most likely end up in this year’s D*Con montage video. 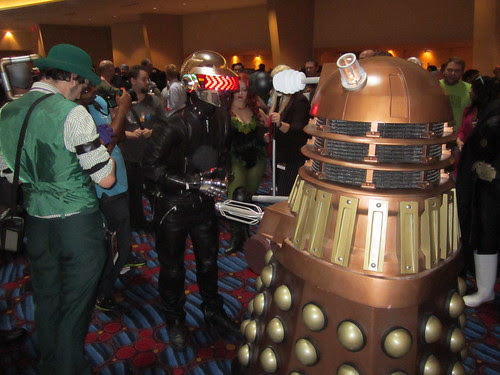 During the evenings we switched out to the mau5 heads. While David had his cheese head and Jecca a red one I made (she added a bow to make it more girly), I brought out an all-white one and a handful of sharpies so people could sign it. We even ran into Grant Imahara from Mythbusters who signed the front as well, although I have no idea which signature is his anymore. 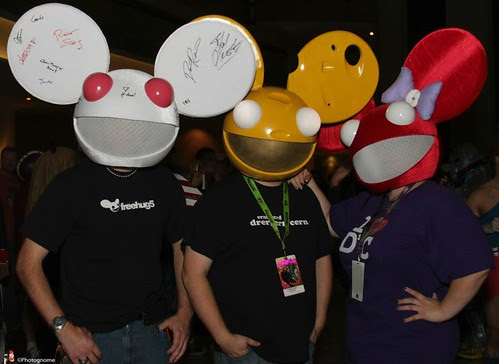 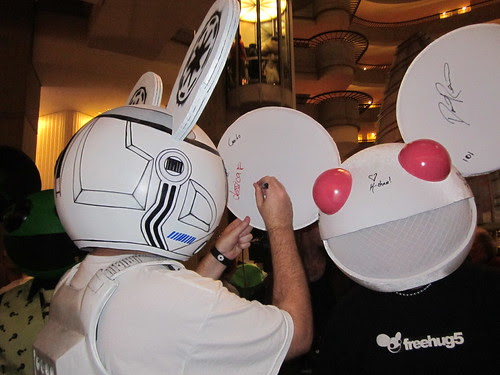 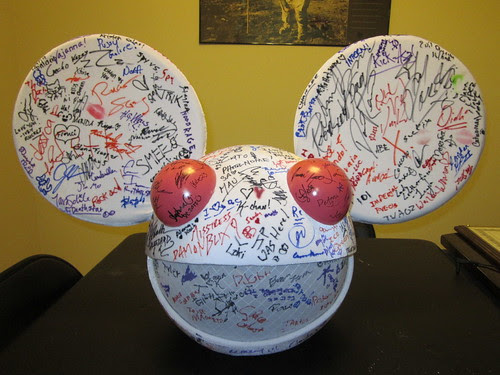 This was our second year in the parade. David went with the Venture Bros group dressed as 21 dressed as Sargent Hatred. Myself, along with our friend Ethan who flew in from Mojave California, once again joined the Ghostbusters. Due to space limitations I left the Game pack at home and sported Dave’s Tainted Love pack instead. One side story I will mention is that Ethan had not slept for the 24 hours before the parade due to work and travel. While we were waiting for the parade to start he was falling asleep sitting on the curve, so I put my leg behind his proton pack and he ended up sleeping like that for a good 15 min. I’m sure we’ll find pictures of that somewhere. 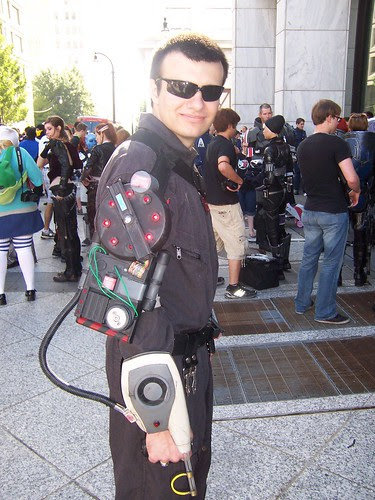 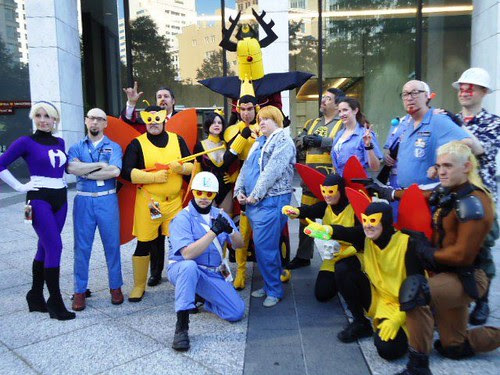 Sunday was probably our most eventful day. David and Jecca attended the Venture Bros panel with several of the creators and voice actors including: Doc Hammer, Jackson Publick, and James Urbaniac , which basically was run as a 70's talk show titled “Let’s All Smoking.” Afterwards, Dave got Jackson Publick’s signature on his henchmen visors, adding to the two he collected last year. While this was going on, I took the Dalek to the Sunday masquerade competition. Unlike the Friday Night Competition we had Delta in last year; this contest not only looks at craftsmanship, but also presentation and skits. Our skit was called “Doctor Dalek”, which had a Dalek cosplaying as the scariest thing he can think of, which is the Doctor. Originally he was going to wear a fez and a bow tie, but I like how he looked when we put the Tom Baker scarf on him at Con Kasterborus, so we went with that route. A friend of ours from the Maker’s shop, Jennifer, server as the fake operator/ Dalek victim during the skit. As soon as we find a video we will post it to the Facebook page. We took home Best Sci Fi. I am very happy with this because the completion really brought out the big guns for this. Literally, a few of the competitors’ costumes were over 16 feet tall. 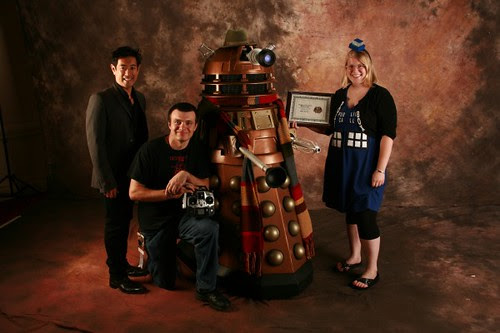 As usual, Dragon*Con rocked at we had a great time. Concerning next year we will be taking a bit of a pause and we both start looking to upgrade our housing and transportation, which we really need to do now as we are running out of room to put all the props. While David and Jecca will be skipping 2013, I will be back, most likely with the upgraded Dalek and a “smaller” new costume (on the table at the time of writing is the 10th doctor’s space suit or Loki). We are also going to try to pop in some smaller cons throughout the year. In the mean time we have a few more back logged write ups to post in the coming weeks, and I’m sure we’ll have a big write up concerning the Child’s Play auction which will have three Zelda items built by David. Be sure to like up on Facebook to stay up to date with our future projects and appearances! 2012 Dragon*Con Album
Posted by Wayne at 7:35 PM