This is perhaps one of the most unique props I’ve built to-date in that it’s actually fully functional. I’m not a huge fan of the slingshots in the Zelda games, but only because they’re not terribly exciting. I like them as much as you could like any other tool in the game functionality-wise, but they’re just not terribly exciting to use, in my opinion. However, I do greatly enjoy the design of the Scattershot from Skyward Sword, and that’s really what drove me to build this prop. Since 2StoryProps started, we’ve collected a lot of molds that really just sit around and collect dust for the majority of the time. While it’s great to be able to cast up something on a whim because you have molds available, it can be financially stressful to make a mold and only make a few castings out of it. So I decided that I would build a one-off original item instead of a master to be molded. But that doesn’t stop me from getting clever with it!

I enjoy papercraft, but I enjoy it in the sense that it can be used as a base for later sculpting work. I can go on and on about my thoughts on papercraft, its merits and weaknesses, but for the purpose of this writeup, it’s just important that I often use it in ways that aren’t typical of papercraft projects. This one started off as a quick 3D model that I built in Rhino. I knew how I wanted to assemble it later on, so I intentionally built it in three separate components. Note: I wanted to pause and mention that early stages of this were not photographed. I was “on a roll” and didn’t feel like stopping to take photos. Sorry! Anyways, after printing and assembling the 3D model, I filled each piece with Smooth-On Smooth Cast 300 resin. Next came the interesting part: I sanded away all the paper, leaving solid resin pieces. The sanding process also removed the polygonal shapes from the paper model and left me with a smooth surface almost ready for assembly. 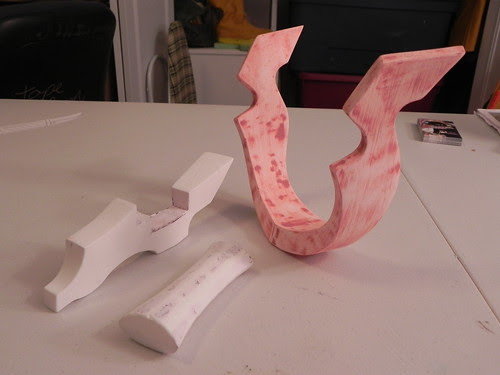 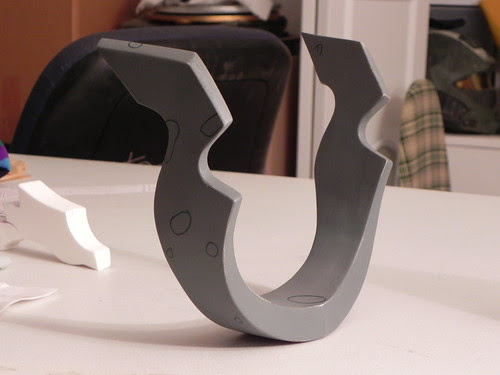 After a bit of smoothing with some glazing putty, I assembled the pieces with some JB Weld, and a steel rod going through the entire assembly for some added strength. 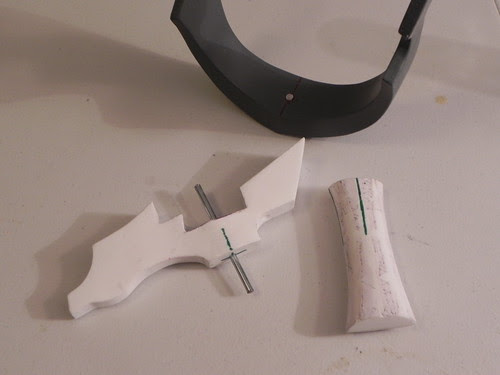 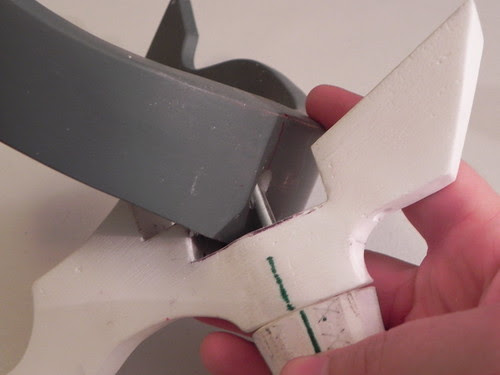 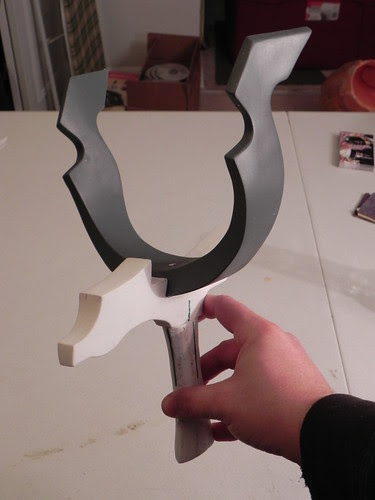 Painting was pretty straightforward, but the tricky part was the grip – in the game it appears to be teal leather, and I was expecting to be searching and searching for this stuff, or else I would have to make my own teal wrap. Fortunately, a semi-local vinyl supplier actually had teal fleece-backed vinyl. I had to actually shave off the fleece backing, though, because it made the grip too thick and the fleece poked out of the edges when wrapped. In the end, it finished off the piece nicely. After applying a faux wood grain to the painted piece, I attached a yellow leather sling with some rubber bands (acquired off of other slingshots, no less). What’s cool about the rubber bands is that they aren’t extruded rubber sheet like your typical office supply rubber bands; these are poured rubber sheets cut by hand, so the thickness is very uneven and they have a very hand-crafted look to them, perfect for the aesthetic of Skyward Sword props. 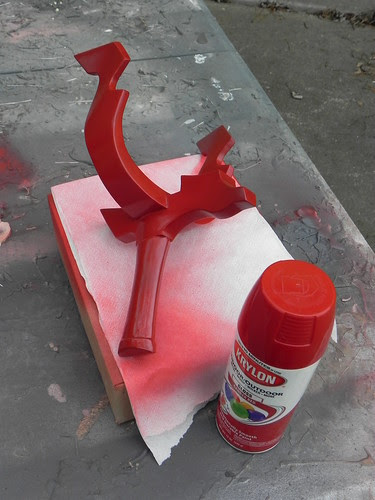 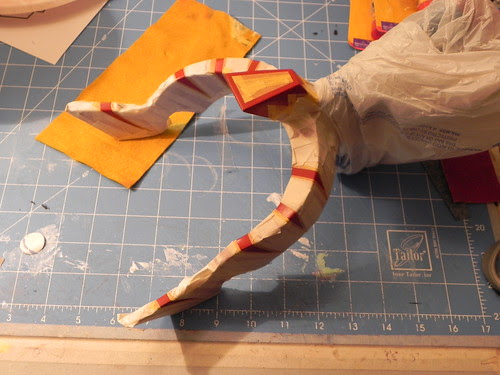 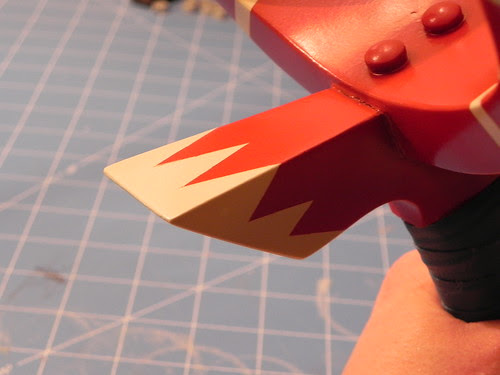 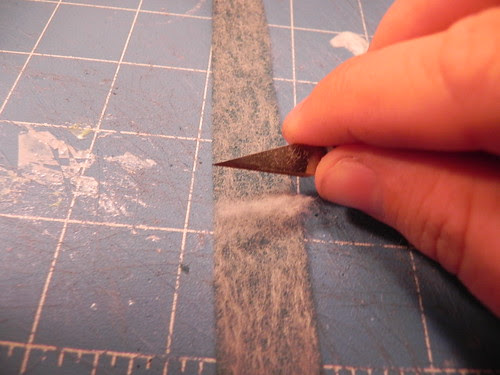 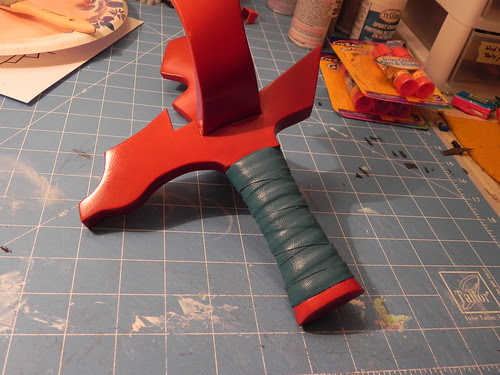 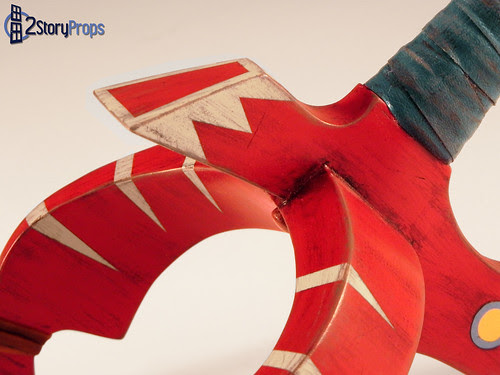 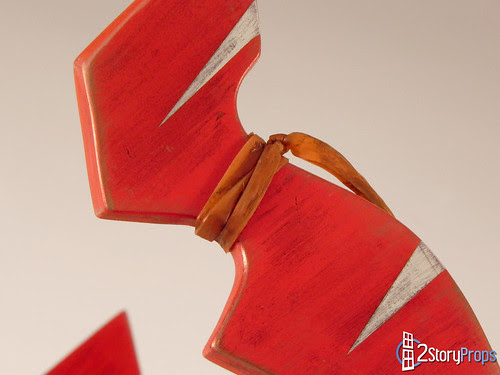 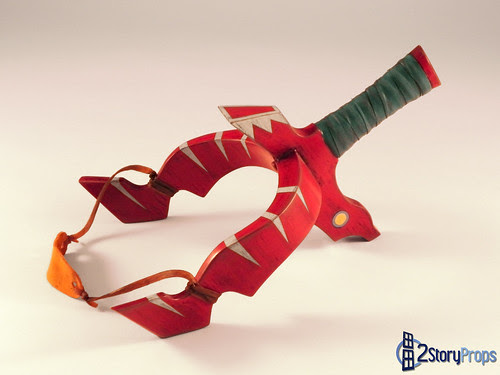 This prop will be available for auction at the Child’s Play charity auction dinner in December of 2012, along with my two other Skyward Sword props.
Posted by David Reimer at 9:04 AM