Back in 2013 I helped a friend out by making a replica of Marceline’s axe bass from Adventure Time. It was a fun, quick little build and I was very happy with how it came out, especially since I had to finish the thing inside of two weeks. Late last summer with Dragon*Con approaching I decided to build the gender swapped version for quick casual costume to bring to the con. 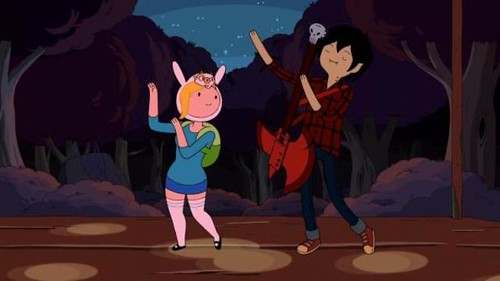 The build started by sketching out a design on the white board at the shop so I could see it full size. I used the real guitar I own (I do not know how to play, I bought if for Rock Smith) to determine the size of the body and neck. Looking at the references I realized Marshall’s guitar has a very long neck, and lengthened it almost 9 inches compared to my real guitar. The body is made up of layers of ½” and ¼” MDF while the neck is made of four layers of ¼” MDF. I decided not to use the foam method I used for Marceline to simplify the construction and speed up the build. The trade-off is I have a bit more weight, but compared to other items I bring to conventions I think it is manageable, especially since the final weight is comparable to a real guitar. 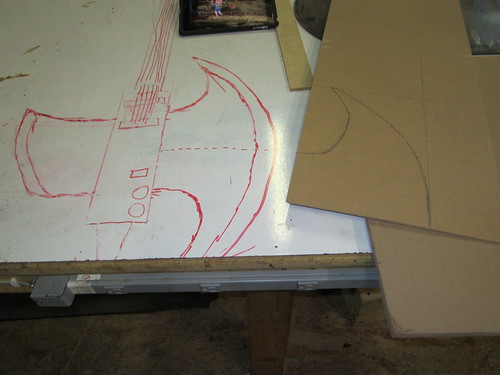 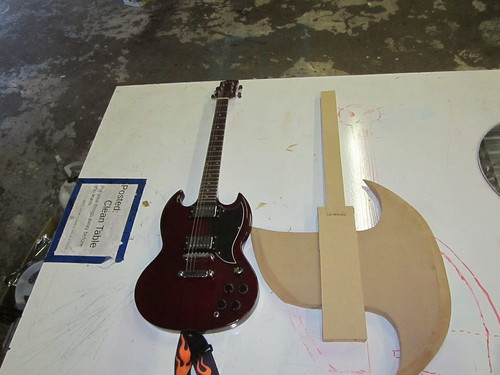 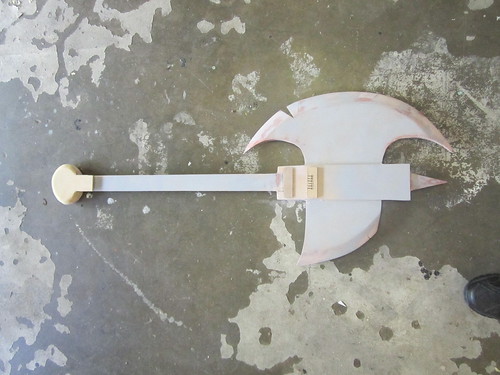 The major difference between the guitar and the bass is the head. Marceline’s bass has a normal head which more or less is like a real instrument and allowed me to use real tuning hardware. Marshall’s instead has a skull that sits over the entire head of the guitar. To make this piece, I made a template and cut out 7 layers of ¼” MDF. The first 6 were glued together and sanded to fit around the neck of the guitar. To match the curve on the back of the neck, the neck was wrapped in wax paper and then pressed into the skull with bondo. The top piece was then glued on, giving me a form that slided right onto the neck of the guitar. 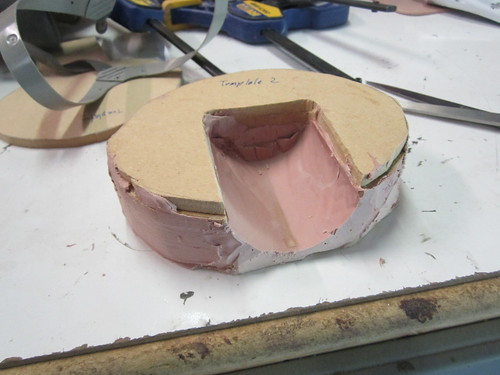 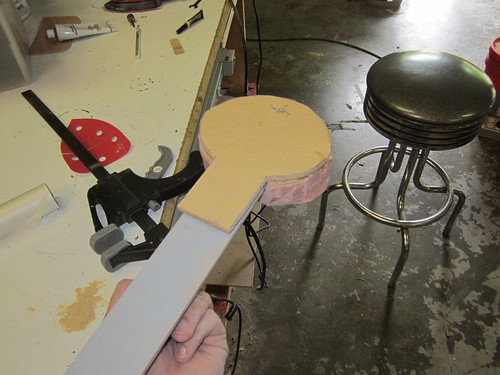 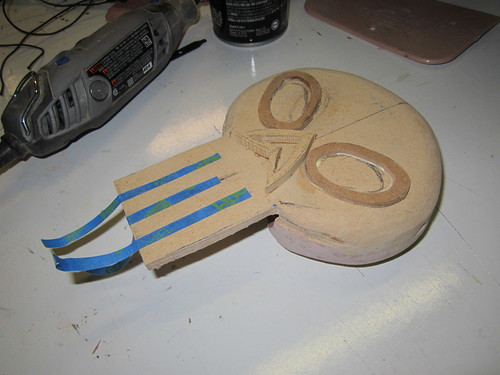 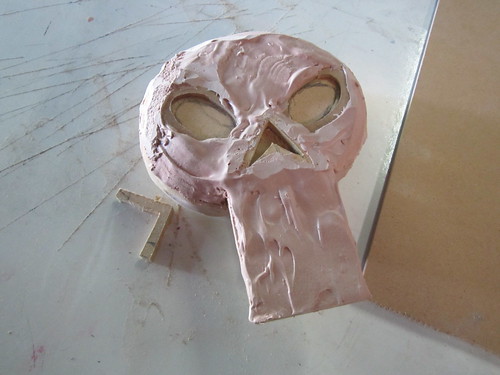 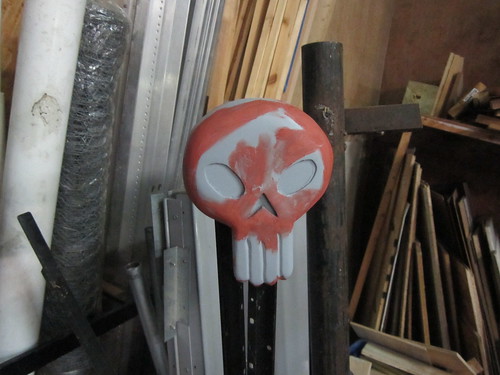 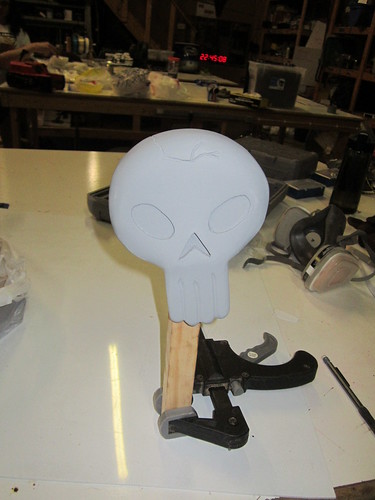 Unlike Marceline’s bass, I could not use real tuning knobs. Instead I shaped them from brass rod and MDF. Since I can’t use the tuning knobs to tighten the strings, they are screwed directly to the neck under the skull then tied in pairs on the inside of the guitar’s body. 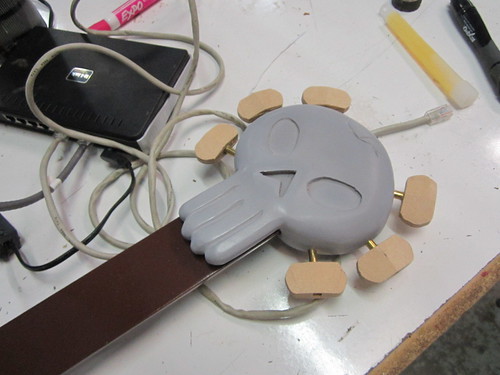 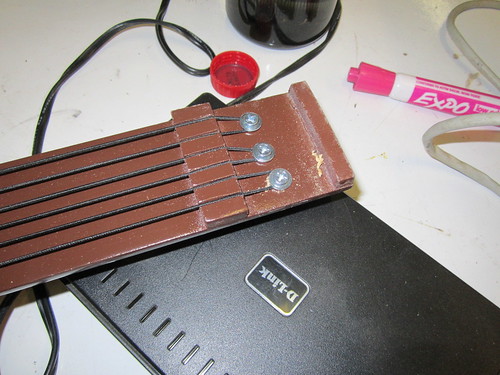 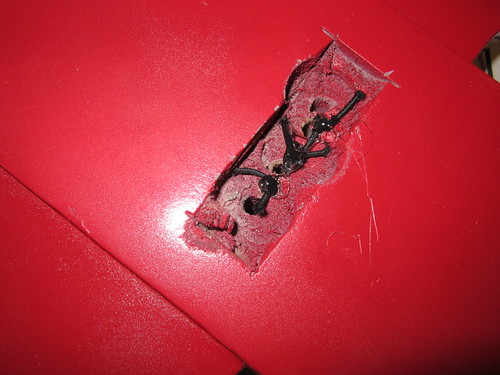 Everything else was basically the same as Marceline’s build. The guitar was primed and painted, the strings added, and real knobs were attached using brass rods. The total build time was comparable to Marceline’s, going from start to completion inside of 2 weeks.

While I intended to debut Marshall Lee at Dragon*Con 2014, I decided against it as I currently have no experience with body paint and I did not want to risk getting any on the moon suit while changing between costumes. One of my co-workers, however, decided to borrow it so it did make it to the con. For our project photo shoot David used his photoshop magic to make my skin appear grey. I will post a picture to our facebook page if I ever get around to trying the full make up. 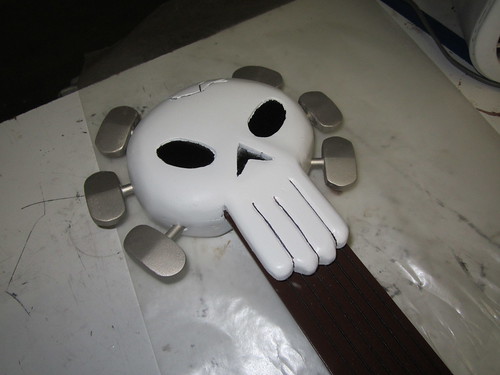 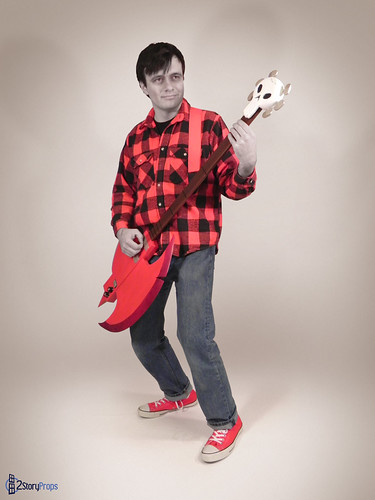 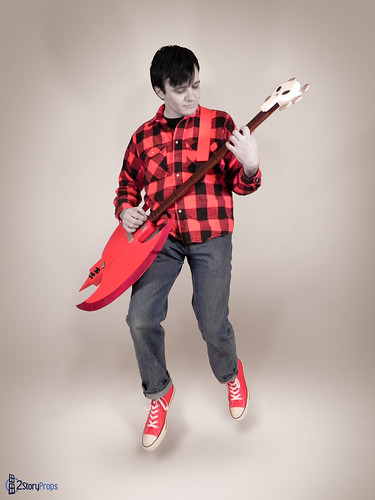 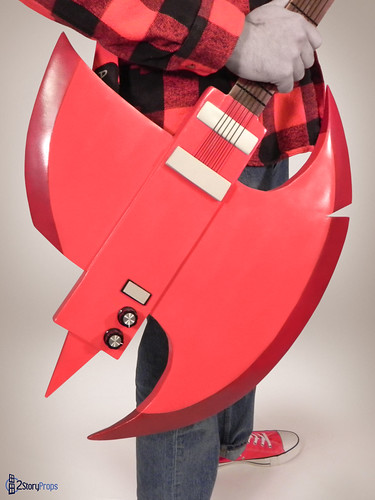 This was a very fun build and I am glad to have worked on both guitars. This is probably my last Adventure Time prop for a while but as always we are working on some pretty cool stuff that we hope to share soon. As always thanks for reading!