So we've been working as a team for a little under a year now. We started off as two independent prop builders that - unbeknownst to each other - were neighbors (upstairs and downstairs). One day we were both out working on our projects, I believe I was working on some Star Wars helmet or something, and Wayne was working on Ghostbusters proton pack molds. I remember looking down and seeing that he was making molds, but I did not recognize the parts. I thought they were custom automotive parts (dash board parts, stuff like that), because people do make custom interiors and stuff. He looked up and we started talking. Immediately we took interest in each other's projects. Wayne was building a team of three movie-accurate Ghostbuster costumes for himself and two of his friends, Ethan and Nick. About a week later I would join the team as their fourth 'Buster. 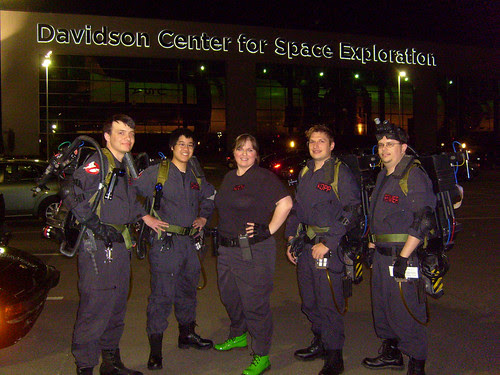 2Story Prop's beginnings was Ghostbuster props and costumes, and Ghostbusters is still very much a prominent subject for our work. However, Halo 3: ODST was getting ready to come out, and we had recently seen the live action commercial for it. "We Are ODST" inspired our next project - ODST costumes styled after the Legacy Effects live action costumes. Numerous side projects fell in between molding sessions and weeks of casting. After two ODST costumes and four Ghostbuster costumes, we are already gearing up for future projects. We still have two more ODST costumes to build for Halloween as well. It hasn't been until now that we've been able to set up a blog. A shakey job situation on my part has brough the ODST project to a hault, and with Dragon*Con closing in, we're both taking it easy until after the convention before we finish up the ODST project. During that time I've been working on setting up our blog and flickr account. As a result of all these projects over the past year, we're going to be dumping quite a bit of material onto this blog. As projects start up, we're definitely going to make an effort to keep an updated blog to discuss our progress.

We're both very inspired by Volpin Props, both in his props and in his efforts to keep an updated blog (something I've failed to do several times in the past). So please join us in our efforts to keep this thing updated. Post comments, ask questions! We both certainly hope that our blog will not only be a repository for our projects, but we both hope that it will become a community for open discussion on props, costumes, and the prop building industry.
Posted by David Reimer at 9:49 PM