As Wayne headed up the Ghostbuster's group costume project, I took the lead on the ODST group costume project. At the time - and even currently - everyone that was interested in building an ODST costume was really only building the video game version of the costume. There were a few builders out there building the Weta live-action costumes, but for the most part it was all video game versions. One of my personal interests in costuming is taking animated or CG characters and building realistic versions of them. Of course, if there is already a realistic version, that just saves me a step (though I do thoroughly enjoy reimagining an animated character in my own vision of a realistic version). The live action commercial "We Are ODST" inspired me to produce replicas of the costumes worn in their short film. 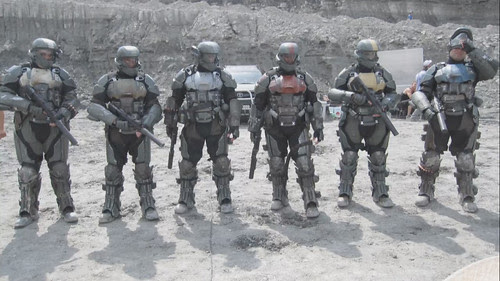 We both knew that this project would be a crucible of moldmaking and casting, and every step of the way it did not disappoint. As I headed up the project, I took on the sculpting portion of the project. For a few parts, I used the Pepakura 3D files that are freely available on the Halo Costuming Wiki (knowing that they were inaccurate to the version we were reproducing, but it saved time). However, I did not rely on parts that other people have made. For this project, I ventured into making my own 3D models and producing Pepakura models from them. It was a huge learning experience on my part, and I've definitely grown as a prop builder from it. However, traditional methods were also used on several of the components.

One major different between our reproduction and the film-used costumes is that the armor components for our costumes are all fiberglass castings. The film-used suits used vacuum-formed plastic parts. While vacuum-forming would have been way faster, and likely cheaper in the long-run, we did not have that technology available to us for about 90% of the project. So we buckled down and molded every single component. Again, it was a learning experience for us both. I've been familiar with mold making for a few years prior to this project, but this project definitely made me hone my skills and add new techniques to my skillset. 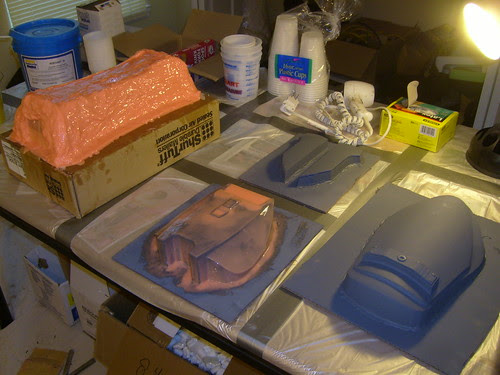 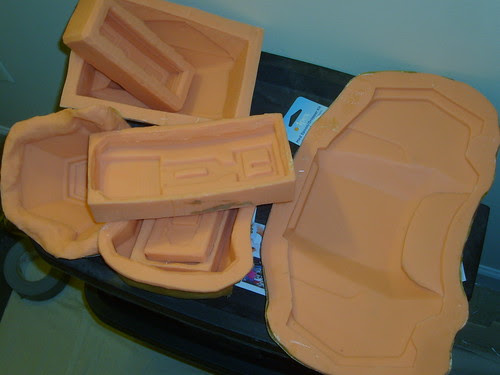 As it is the case with most full-armored costuming projects, the helmet took center stage in our production. The helmet began as one of those Pepakura models, though about 60% of it was torn away and rebuilt to reflect the Legacy Effects helmet. The LE helmet and the game helmet vary greatly in proportion and details, so it took careful reconstructing on my part to get the right look. It still differents somewhat from the film-used helmet, but for the most part it's pretty accurate. One major aspect of the helmet was the complex shape of the visor. The ODST helmet doesn't just have a visor that can me made out of a motorcycle helmet visor. The project required that we build a vacuum-forming machine and vacform our own visors. We thought about outsourcing it, but we figured that if we're gonna aim for going the extra mile, we better walk each and every step. Initially we failed miserably, but we took another stab at it and got the process down. 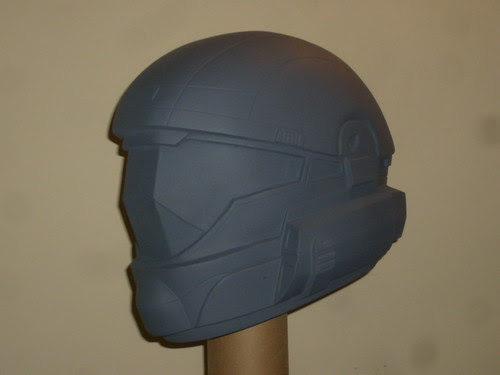 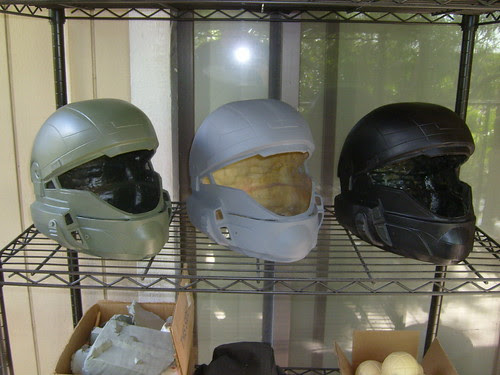 Another major step for us would be solid casting. For most people that probably seems like some too easy for us to consider a major step. However, the complexity of our SMG model made us worry greatly about the process. With a pretty sizable and detailed prop, there are so many opportunities to screw up. But we came up with a method by which we approached the casting in two phases: detail and fill. Again, this probably isn't a big deal for a lot for people, but for two fledgling prop builders that haven't done that yet and are starting it with a rather complex model, it was a pretty big deal. 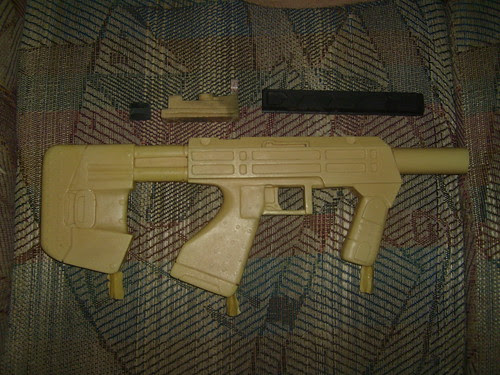 The entire project was probably inspired by the attention to detail on the film-used suits more than anything. For the most part, you only get a faded, hazy look at the costumes during the commercial, and only Tarkov's suit get's the spotlight. But Legacy Effects' efforts to intricately detail each and every suit blew me away. I mean, for like 90% of the short film you wouldn't even see any of the details, but it's one of those things where you would miss the details if they weren't there. It would lack reality. So that inspired me to finish off each suit with the same attention to detail. Each component of the costume ends up being its own little mini project by the time I get to the weathering stage, but the final result ends up being totally worth the all the headaches, the months and months of molding and casting, and the incredibly time consuming task of weathering each and every part for a complete composition. 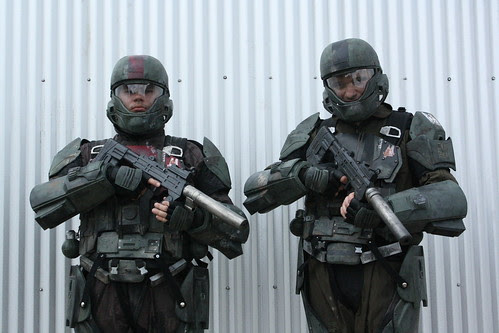 As I said in the previous post, a recent shakey situation at work as forced me to pause the project. We were planning on building four ODST costumes by Dragon*Con, but this situation has caused me to start job hunting. I found a sub-contracting job as a graphic designer, and that's keeping me rather busy. So the current plan is to hold off until after Dragon*Con to complete the other two suits. We're gonna try to make the other two suits happen by Halloween, so that gives us under two months. Plus, I will be moving half-way through October, so that will definitely cause us to expediate the process. To help things go faster, we're going to give the two remaining costumes the "rookie treatment," by which they will only be weathered ever so slightly (as if they've only been in a battle or two). A lot of the work is already done, it's just a matter of finishing up a few parts and getting the pieces assembled. Look forward to Halloween time, when we should be able to post photos of the entire crew.

Click here to see photos of the building process of the suits.

Click here to see photos of the finished suits in action.
Posted by David Reimer at 10:41 AM