A Brief History of The Rocket City Ghostbusters

As Dave mentioned in his introduction post, the first project that brought us all together was the construction of some Ghostbuster equipment. What started off as a Halloween group costume for three people has grown into a volunteer group currently with four members who have made appearances at various events around Huntsville and have been recognized all around Huntsville. I am of course referring to the Rocket City Ghostbusters.

It’s hard to say exactly when the RCGB got started. We could go all the way back to the late 80s when my brother Kyle and I use to get up every Saturday morning, put on our blue plastic packs, and watch The Real Ghostbusters cartoon show on TV. We had everything Ghostbusters growing up; action figures, the fire house, tee shirts. Everything. In fact, my very first costume was a Ghostbuster when I was four. My mom made my brother and I patches out of felt and got us jumpsuits to wear with our blue plastic Kenner packs. So if you trace it back I have always been a Ghostbuster at heart. Years later in college when I started getting into serious costuming, I was looking for a project that would top the Jango Fett I did my sophomore year of college (GO ILLINI!) when my mom recommended I try to build a Ghostbuster costume. After searching the web I discovered a prop building site, www.gbfans.com, that had forums and plans for how to build your own proton pack replica. Granted I had limited funds in college, so my materials were limited. My first attempt (Mark I) was made of craft foam and paper mache. 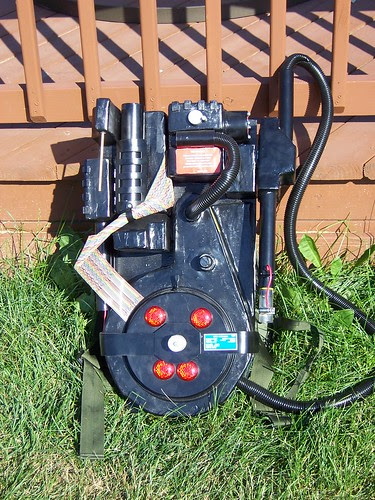 It came out okay but nothing to brag about. I sold this pack and then tried one out of bass wood (Mark II). It was a move in the right direction, but nowhere near accurate. 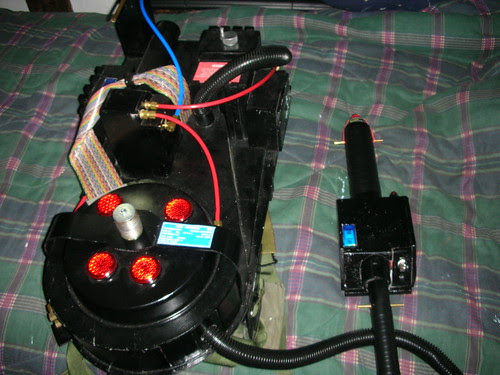 My junior and senior year I had a job, thus money, so I decided that I was going to get whatever I needed to make a good pack. I purchase a vacuum formed shell on eBay and spent 2 months making my first true proton pack (Mark III). At the time, I thought it was beautiful, and I won a $500 costume contest with it and it is still featured on wtfcostumes.com. Unfortunately, I needed money to pay my rent, so I had to sell it. That was the first prop I ever sold without wanting to, and I knew that I would make another one when I could afford it. 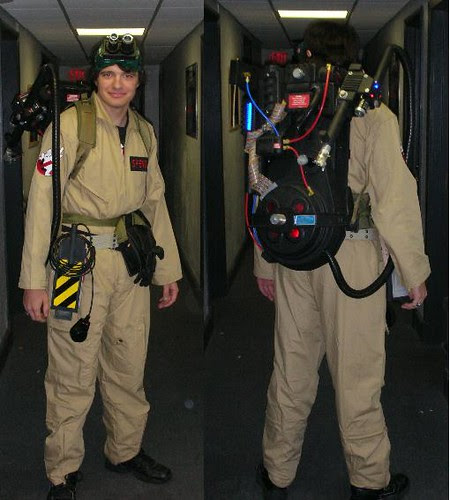 In 2009 I moved to Huntsville Alabama to start a job at Orion Propulsion (I is a Rokit Scientist) and started hanging out with Ethan whom I went to UIUC with. Early on we discussed making some Star Wars costumes for Halloween since I was originally intending to shave my head and make a kick ass Starkiller costume to join the 501st. Then one day while eating at Rosie’s we discovered that Ethan (25 at the time) never saw Ghostbusters. I put the DVD in and suddenly we forgot about Star Wars and thought about making a Ghostbusters group costume. I really liked the idea, but knew we really needed three people to pull it off. About 2 weeks later another class mate, Nick, moved down here and was in on the project as well. Thus the “Huntsville Ghostbusters” began! (We changed the name to Rocket City Ghostbusters in August 2009 since we thought it sounded cooler.)

When this project started I had a few goals. First, these were going to be movie accurate with no exceptions. Second, the packs (Mark IV) would all be identical. And third they had to be awesome! With that in mind I knew I was going to have to find a way to “mass produce” the packs. After doing some research online I decided to make a master positive from wood, and then create a rubber mold to allow me to pull fiberglass shells. It was during the casting process that I met Dave as I was laying some fiberglass while he was painting something. Not long after he became our fourth Ghostbuster. I won’t spend too much time on how the packs came together since that is documented very well on gbfans .com with this thread: 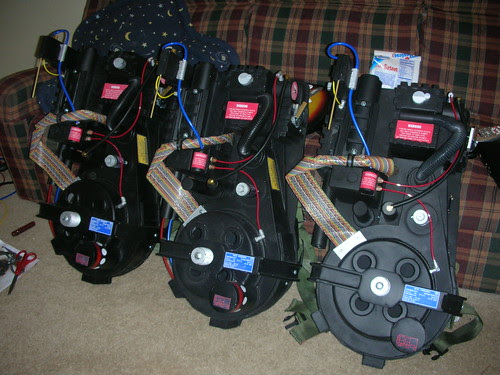 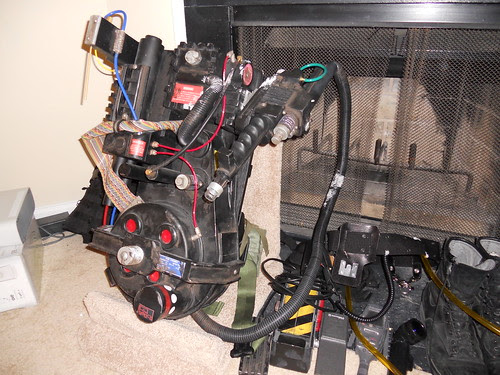 Rather, I’d like to talk about some of the details that often get over looked. To start with, the uniforms. I am really surprised we have never been asked why our uniforms are not kaki. The reason is that we wanted people to have no doubt that these were not store bought, so we decided to use the charcoal grey suits briefly seen in Ghostbusters II. You actually can’t buy jump suits in this color. We started off with black suits, bleached them, and dyed them with navy blue to get the appropriate color. Jecca is wearing a Dickies work shirt that is close in color to our uniforms. 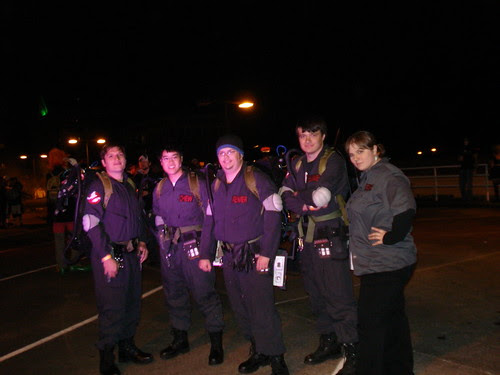 Our name patches were specially ordered from eBay since we wanted to be ourselves rather than the movie busters, so our patches read out names. Originally we dyed volleyball pads to reflect the movie elbow pads, but since those are not comfortable we decided to go with better looking military black elbow pads. After all, we are not the New York Ghostbusters, so we don’t have to look exactly like them.

The belt gismo was designed by Dave. It is a piece of layered sintra with a custom decal put over it to make it look like a circuit board. The wired and bulb were all laid by hand. Dave even made the holster from vinal and cardboard.

The traps were made the same way as the packs. A positive trap was made from plywood, molded, and then cast in resin. Each buster wears a trap on their belt via a custom made leather holster with a flush mount bracket. At this time the traps are just eye candy although we plan to make a smoking trap in the near future. 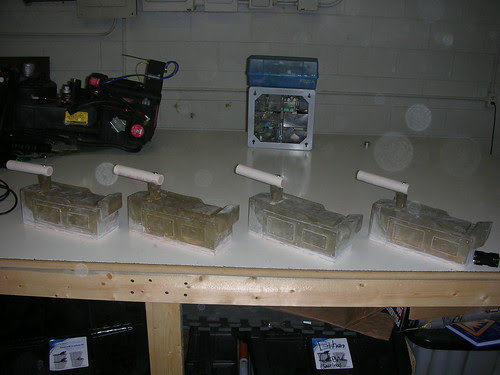 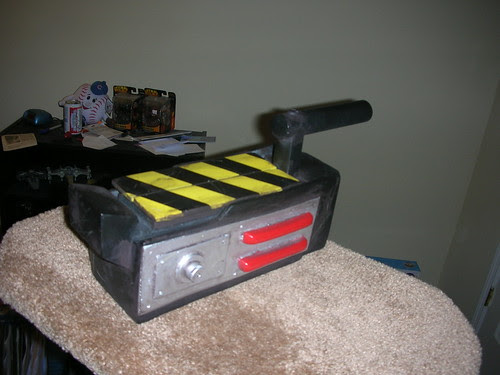 The PKE meter was hand made by Dave based on concept art for the Video Game. He sculpted this from a piece of MDF, molded it, and casted it. This is one of the most impressive pieces of the costume. 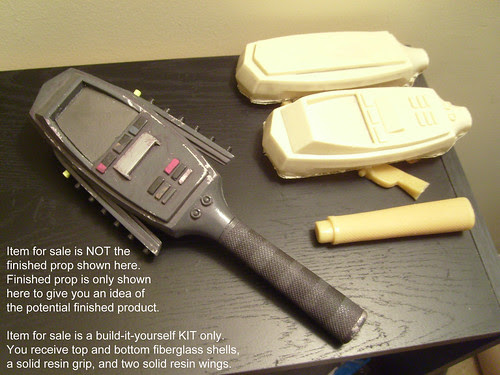 Additionally, we each wear a Motorola MT 500 radio (same model used in Ghostbusters one) and an angled flashlight as seen in Ghostbusters: The Video Game.

After 6 months of work, the suits made their debut on Halloween Day. We walked up and down Bridge Street and then hit the Madison Square Mall where we couldn’t go 5 feet without people taking pictures. At Nightmare on Clinton we took home Best Group Costume and Second for the entire event. It was one heck of a day for the RCGB. We had so much fun that we decided this was not going to be just a Halloween costume, but like the 501st we were going to use this costumes for various charity and volunteer events. Since Halloween 2009 we have made appearances at Yuri’s Night, Free Comic Book Day at The Deep, and the Good Day Kids Festival at Lowe Mill. At each event, we have a hard time moving since we are stopped every 30 seconds for pictues, but I think I speak for everyone when I say meeting a Ghostbuster in real life is an awesome experience.

Even more awesome? Earlier this year we decided that we wanted make our uniforms a little more distinctive so people would know we are specifically the Rocket City Ghostbusters. Thus Dave with his skills in graphic design created a new No Ghost patch where the cross bar is removed and in its place the red NASA swoosh goes across the patch (The Huston Ghostbusters have a similar patch where they also made the circle blue to look closer to the NASA patch). We had this made up and now we have our own franchise patches! 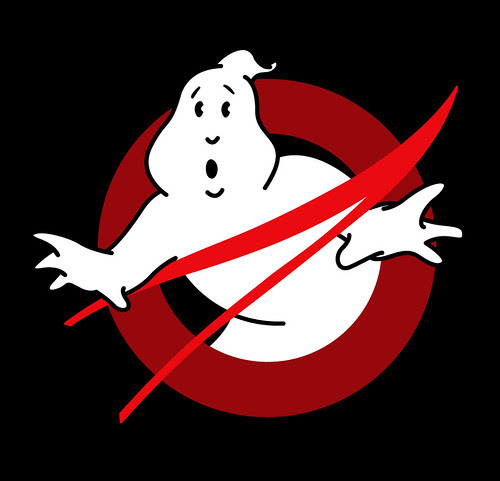 So that is the Rocket City Ghostbusters story in a nutshell (I could go on and on and on). We will be making appearances in the near future at Dragon*Con, and keep an eye out for us as October rolls around. Later on I’ll be adding a post about our newest RCGB prop, the Mark V Video Game Proton Pack!

If you are interesting in an appearce by the Rocket City Ghostbusters please email us at 2storyprops@gmail.com or rocketcitygb@gmail.com!
Posted by Wayne at 11:05 PM